Baptist minister, civil rights activist, presidential candidate and talk show host are just four of the hats Al Sharpton has worn since his days growing up in the public housing projects of the Brownsville section of Brooklyn.

Now his life, which has sometimes been caught under the shadow of controversy, is the focus of the new documentary Loudmouth, which premiered on Saturday at the Tribeca Festival in New York City.

EGOT winner John Legend, who served as one of the executive producers on the project, and Grey’s Anatomy alum and Broadway star Jesse Williams were among the stars who hit the red carpet for the event at BMCC Tribeca Performing Arts Center.

Star power: Jesse Williams and John Legend were among the artists who brought some star power to the premiere of Loudmouth, a documentary about the life and times of Al Sharpton

Williams, 40, stepped out in front of admiring photographers in black and white-patterned pants with a gray shirt and a tan jacket.

He also gave white sneakers, and had his dark hair closely shaven to go along with a full beard and mustache.

The actor, who left Grey’s Anatomy after 12 seasons on the job, has been living in New York for his new gig on the Broadway stage, playing a baseball player who comes out of the closet in the revival of Richard Greenberg’s Take Me Out. 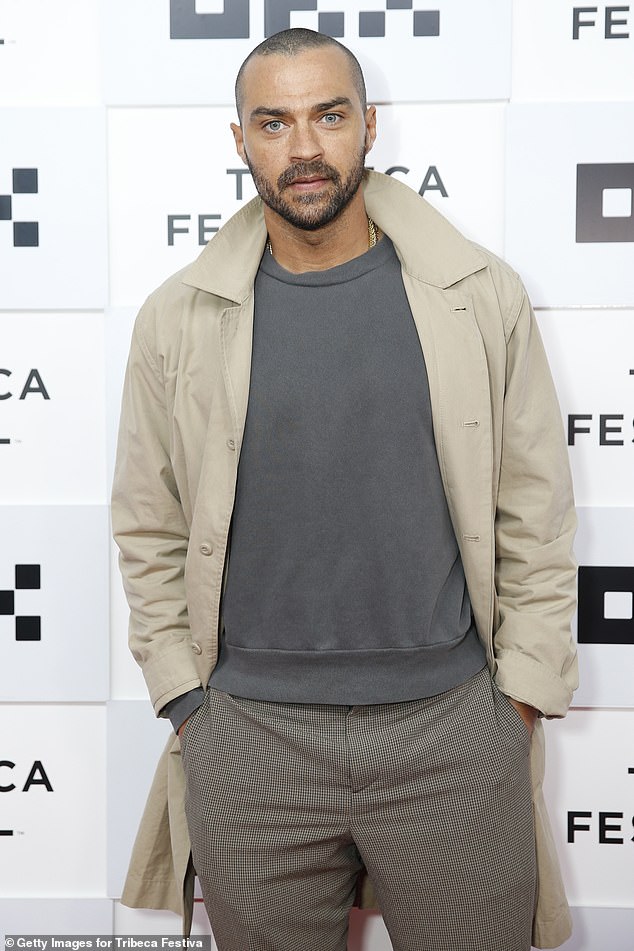 Cool cat: Williams, 40, stepped out in front of admiring photographers in black and white-patterned pants with a gray shirt and a tan jacket. 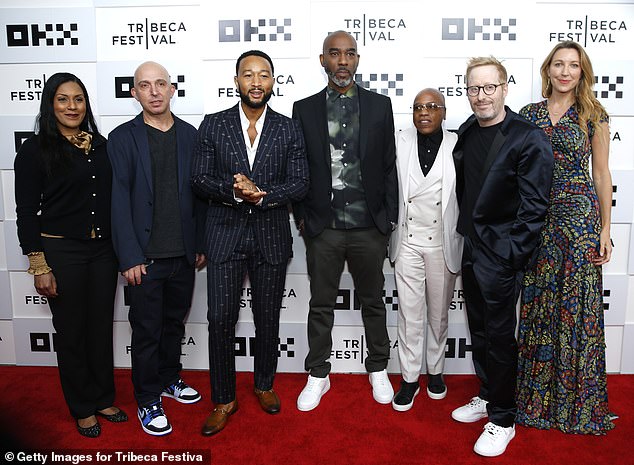 Legend, 43, showed off his impeccable style in the black pinstripe suit that was paired with a white dress shirt and brown leather shoes.

He strutted his stuff on the red carpet solo and alongside some of the other people who worked behind-the-scenes on the documentary.

The musician, who has been branching out into producing over the years, is one of just 17 people to have won and Emmy, Grammy, Oscar and Tony, otherwise known as an EGOT, which has been referred to as the ‘grand slam’ of showbusiness.

Singer and actress Jennifer Hudson was the latest entertainer to join the illustrious list of EGOT holders at last Sunday’s Tony Awards ceremony.

The documentary’s director, Josh Alexander, was the picture of cool in a glistening black suit that he wore with a black t-shirt and white sneakers. 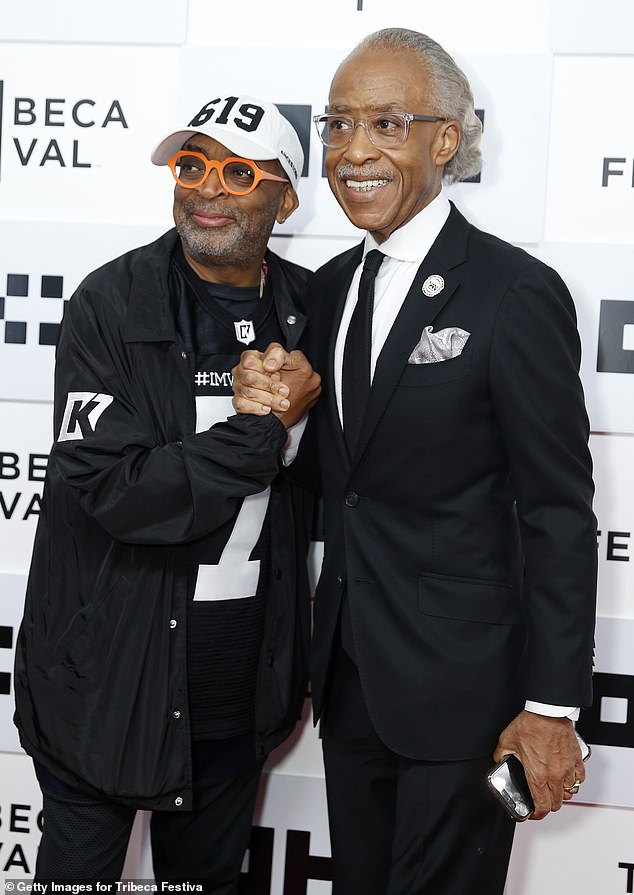 A-list turnout: Acclaimed director Spike Lee, 65, was on hand to lend his support for the film and the center of all the attention at the premiere, Al Sharpton, 67 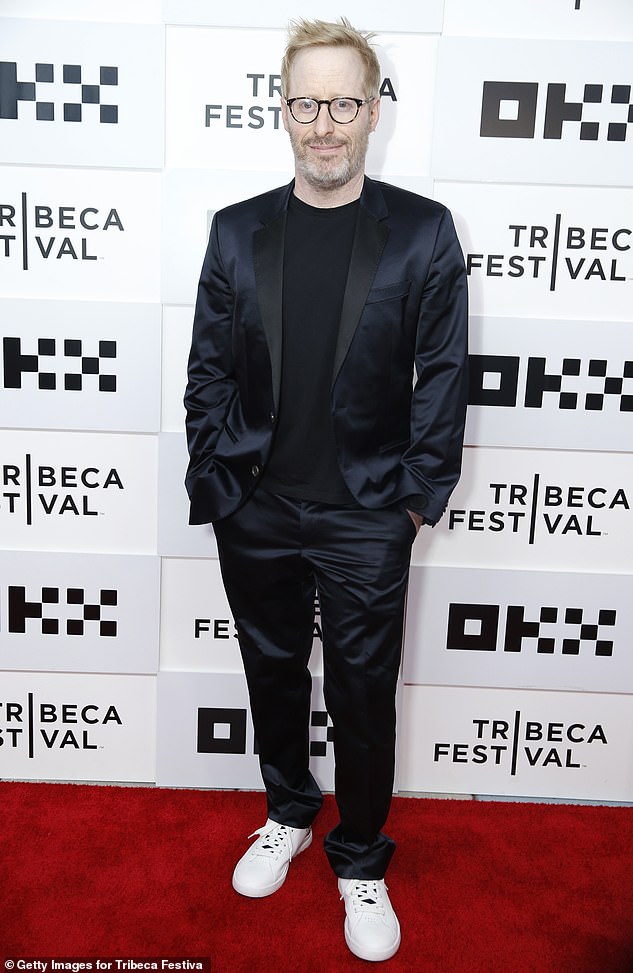 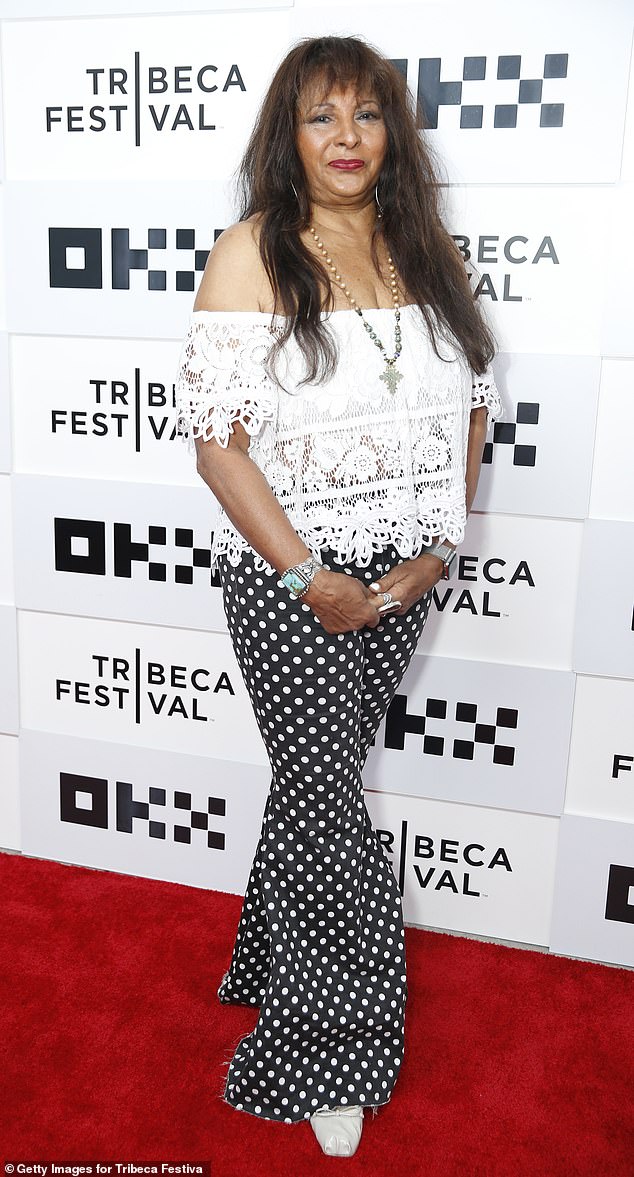 Acclaimed director Spike Lee, 65, was also on hand to lend his support for the premiere event dressed in a sporty, all-black ensemble.

At times he could seen chatting with Sharpton, as the two New Yorkers have known each for many years.

Sharpton’s longtime girlfriend, Aisha McShaw, stood by her man’s side looking glamorous in a black ensemble. 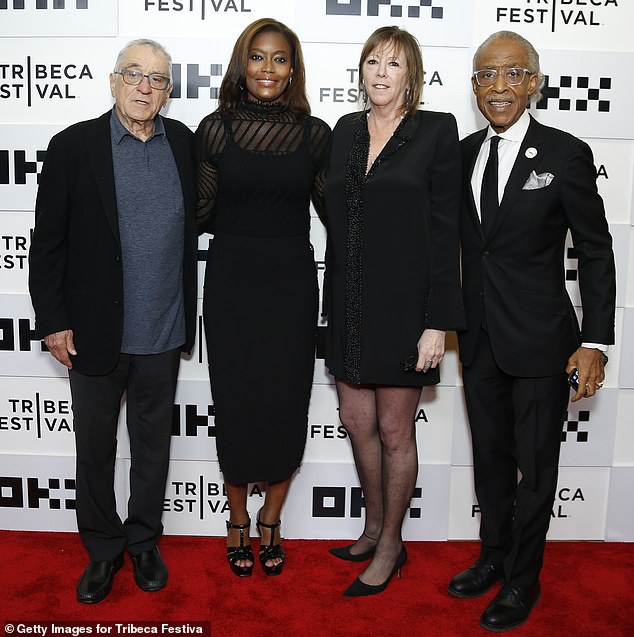 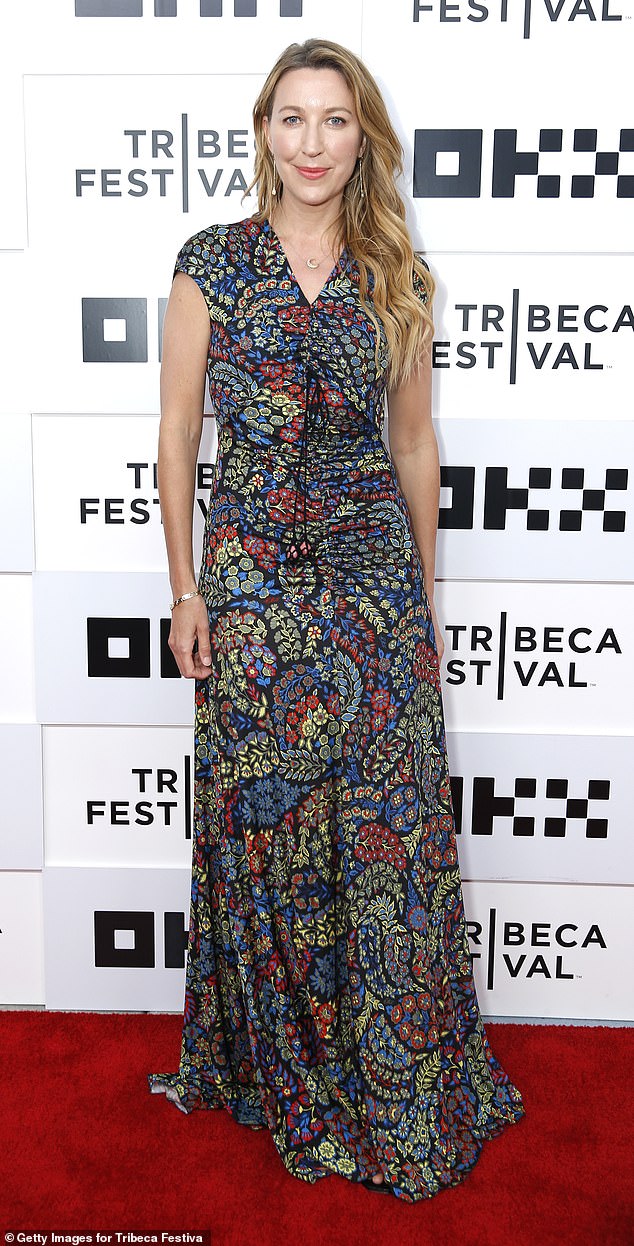 Lovely: Ty Stiklorius, who was an executive producer for the film, looked elegant in a colorful dress that resembled a paisley pattern

On this night she wore her dark tresses long, with a slightly messy look, and a part in the middle.

The co-founders of the Tribeca Film Festival, Robert De Niro and Jane Rosenthal, made an appearance on the red carpet, posing with Sharpton and MSNBC president Rashida Jones.

Loudmouth ‘documents the winding road that is Al Sharpton’s life story as an iconic activist and spiritual leader. Viewers peek under the fold and witness the unrestricted details of Sharpton’s development from an 8-year-old preacher to a (sometimes painted as controversial) civil rights figure. Along with his history in the public eye, the good and the bad, the film offers behind the scenes insight into Sharpton’s experience as a presidential candidate advisor and racial justice advocate during the volatile climate of 2020,’ according to the Tribeca website.

After the premiere screening of the film, Rev. Sharpton sat down for a conversation with Lee and Legend that was moderated by Cori Murray. 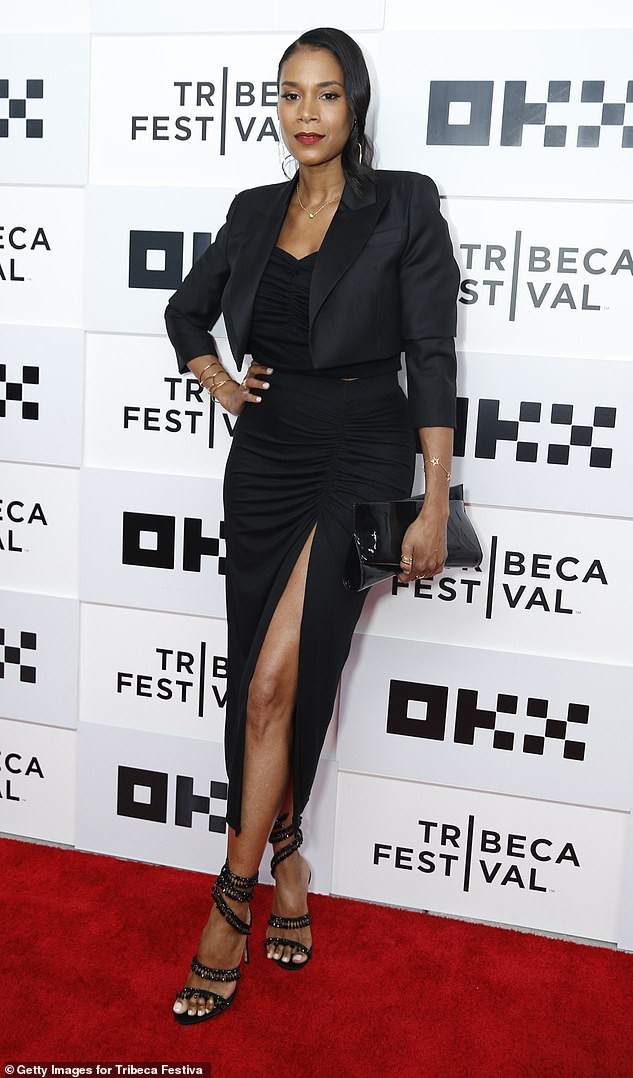 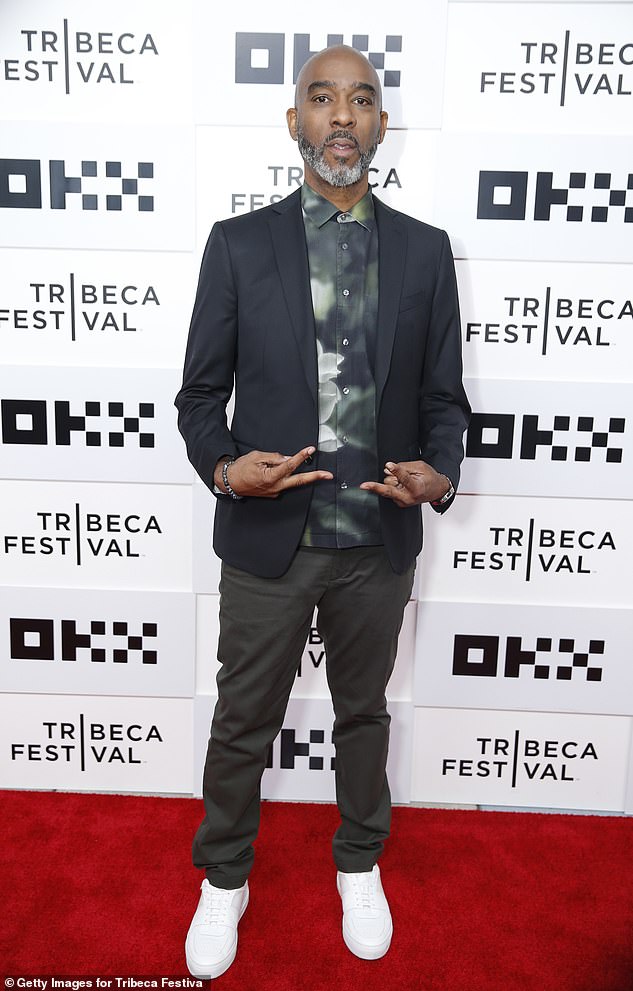 Peace: Mike Jackson, who was one of the producers for the documentary, flashed a couple of peace signs as photographer lined up on the red carpet snapped away